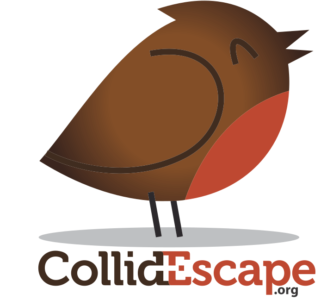 Collisions are most commonly caused by the reflective characteristics of glass. Because the outside of glass reflects the environment around it, birds do not recognize it as a barrier. The birds see the reflected environment, such as trees and sky, and collide with the glass assuming it is a clear flight path. Any window, large or small can be a killer. CollidEscape is applied to the outside of a window so as to disrupt the reflection off the outside surface that birds perceive as a continuation of their environment.

Birds are frequently killed in these collisions or are stunned, only to die of internal injuries later. It is estimated that one billion birds die as a result of window collisions every year in the United States alone.

Stop Birds From Hitting Your Windows!